HOPE IN A SHAPE-SHIFTING WORLD

Faith needs a freedom agenda (My contribution to the Convention on Modern Liberty). Genuine faith – in God, in the good, in people and in the future of our planet – grows through freedom, depends upon freedom to keep it honest, and can contribute to the shared openness and strived-for equality that is part of our free flourishing.

More on Christianity and the limits and opportunities of 'rights'-based discourses and practices here.
Posted by Simon Barrow at 4:18 PM 4 comments:

WATCHING LIBERTIES
The Convention on Modern Liberty, a huge alliance of civil society groups in dialogue with parliamentarians and policy makers, is underway across Britain this morning. The live webcast of events can be watched on the Convention website. Proceedings began with a speech by Shami Chakrabarti, director of Liberty, who warned that the erosion of civil liberties is happening incrementally in Britain, and other parts of the world. She highlighted government compromises on fair trials, free speech and privacy - as well as state collusion in torture in the name of a 'war on terror'. A new discourse on 'fundamental human rights for all human beings' is needed, she declared. Ekklesia is coordinating a conversation on 'faiths and freedoms' as part of the Convention gathering at the Institute of Education in London - 11.45 today, with speakers Keith Kahn-Harris (sociologist, New Jewish Thought), Savitri Hensman (equalities adviser, Christian commentator) and Vaughan Jones (CEO of Praxis) plus a wide range of participants from faith and non-faith backgrounds.
Posted by Simon Barrow at 10:08 AM No comments:

Evangelicals who love their gay neighbours - Guardian Comment-is-Free, Simon Barrow. 25 February 2009. There is a growing movement among Christians normally seen as conservative to affirm the rights of gay people.

In Britain, pro-gay evangelicals have also been "coming out". A few years ago veteran Methodist preacher George Hopper published an online book that sums up the difficulty of the shift, but also its hopefulness. It is called Reluctant Journey – A pilgrimage of faith from homophobia to Christian love. /continued...
Posted by Simon Barrow at 1:34 PM No comments:

SPEAKING UP FOR CHANGE

Posted by Simon Barrow at 2:25 AM No comments:

Why spend money dissing other people's beliefs / non-beliefs on public transport, when you can subvertise with the free bus slogan generator and give the money to something useful? 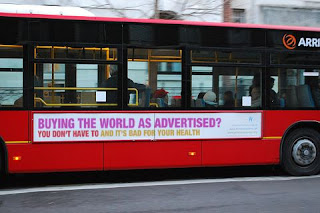 Over on Ekklesia we've published a number of pieces to mark the 200th and 150th anniversaries (of Charles Darwin's birth and the publication of On the Origin of Species, respectively). There's Dr Denis Alexander's Why Christians should celebrate Darwin and Professor John Hedley Brooke's Darwin and Religion. The latter has quite a few additional links appended. There's also a summary of responses from the British churches and related academics or agencies, and an education angle from America.

As my comment indicates, I really don't buy into the 'rescuing Darwin' schtick, as it seems to me to feed that which it contends, and to distract attention from the common purpose of harnessing good science to meeting needs and enhancing understanding. Also, interactions between science and theology premised on trying to redress, reassert or reassess the conflicts of the past are in danger of being over-determined by what they should be letting go of or transcending. Oh, and the ComRes survey was rather counterproductive. It generated a problem through flawed questioning, and possibly inadequate attention to sampling errors.

Meanwhile, here's a relevant anniversary / bicentenary blog swarm. And an interesting post on, er, post-Darwin from Bob Cornwall.
Posted by Simon Barrow at 7:46 AM 3 comments:

For those of you who use Twitter, and for those who might want to try it, Ekklesia has just started tweeting here. We'll be running links to our content as it goes up, through RSS, and adding one or two extras as well. My own Twitter is scrolled on the right-hand column here.
Posted by Simon Barrow at 4:20 AM 3 comments:

"Not everything that is faced can be changed, but nothing can be changed until it is faced. " - James Baldwin, writer and civil rights leader
Posted by Simon Barrow at 1:29 AM 1 comment:

My experience of being a Christian is that of a surprising, continual and contested process of reformation and rediscovery - personal, intellectual, spiritual and political. It feels far removed from the kind of faith that many zealous believers and non-believers seem attached to. This essay on Being Christian in a sceptical climate draws on previously published material, but I've prefaced it (substantially) and modified it in the light of an interesting exchange as part of a meeting I spoke at recently, organised by the Central London Humanist Group. I've also included some links below to related articles on the theme of 'believing in God in post/modernity' which I have written in the last 18 months or so. There are overlaps, of course. But hopefully they can be viewed as looking at the same tantalising mystery from slightly different angles.

* What difference does God make today?
* Three ways to make sense of one God
* Rescuing God from our attempts at belief
* Which Jesus are we expecting?
* The God elusion
* Theology, science and the problem of ID
* Facing up to fundamentalism
* Turning God into a disaster area
* Re-thinking Christianity
* Why we need to rid ourselves of 'the god of the slots'
* Resurrection is no Easter conjuring trick
* Coming under liberating judgement
Posted by Simon Barrow at 7:12 PM No comments:

"[We need] to embrace a "new bottom line" in which corporations, social practices, government policies and individual behaviours are judged rational, efficient or productive not only if they maximize money or power, but also to the extent that they maximize love and caring, kindness and generosity, ethical and ecological sensitivity, enhance our capacity to treat others as embodiments of the sacred and to respond with awe, wonder, and radical amazement at the grandeur of the universe." - Rabbi Michael Lerner
Posted by Simon Barrow at 1:38 AM No comments:

CONVICTIONS NOT TAKEN ON TRUST

Oh dear. It's not hard to imagine the depressing forward trajectory of the story that broke this morning about a nurse in Somerset who was suspended on a disciplinary charge after she offered to pray for somebody she was caring for who took exception and reported her. The context was a publicly-funded nursing role. I've tried to respond on behalf of Ekklesia by calling for a non-confrontational approach to resolving this, and trying to look at the wider changes which are bringing about more of these situations. My media comment was:

"One hopes that an issue like this might be resolved in the joint interests of patients, carers, institution and staff without turning it into a huge legal and political issue. But this incident clearly illustrates the 'culture clash' that can emerge in our public institutions as the Christian faith loses its predominance within a society that has previously been shaped by its story.

"With the demise of Christendom, people who do not believe in a particular way often find the presumption that they should or might do so troublesome. On the other hand, Christians who have been used to different implicit 'ground rules' feel that their identity is being eroded by the requirement to maintain a clearer boundary between what they might do in a voluntary capacity (including praying for people), and the culture of restraint being developed in publicly-funded bodies where people of no faith and other faith may see things very differently.

"This is something that needs much more debate and constructive discussion. There is a tendency for disputes of this kind fairly rapidly to descend into confrontation. One can almost predict that some campaigners will try to turn this into another case of 'Christians being persecuted', while others will say it is about 'Christians trying to force their beliefs on people at the taxpayers' expense'.

"That kind of row gets nowhere. Instead we need to look at adjusting to change and redefining roles."

Posted by Simon Barrow at 7:24 PM No comments:

Savi Hensman has produced another very useful research essay for Ekklesia on different church attititudes and stances towards human rights for all. Since 1948 Christians have played a significant role in extending personal and societal respect for human dignity, including promotion of the UN Declaration. At the same time, church leaders have also questioned and denied rights-based precepts and practices in a number of instances. In this paper, Savi traces these discontinuities while pointing to the substantial traditional theological and spiritual resources that can be deployed in producing and developing shared commitments to freedom and justice.

The publication of this document coincides with the Primates of the Anglican Communion meeting in Egypt from 1-4 February 2009, the upcoming Church of England General Synod discussion on the Human Rights Act, the Convention on Modern Liberty in the UK, and recent comments on human rights from the Vatican, from Evangelicals and from the new Patriarch of the Russian Orthodox Church, Metropolitan Kyrill of Smolensk and Kaliningrad.

See also from the same author:
* Being on the side of the crucified
* Developing the Universal Declaration of Human Rights
* Human rights are not just for individuals
* The Christ child, the vulnerable and human rights
* Tradition, change and the new Anglicanism
* Prayerfully seeking justice and mercy
Posted by Simon Barrow at 4:23 AM No comments: