I plan to join the good folk at St John's Church in Edinburgh, the team behind the Festival of Spirituality and Peace, and the Streetwork homelessness charity, who will be holding a 'street porridge sale' from 8am to 1pm on Wednesday 12th December.

The idea is to raise money for Streetwork's direct engagement with single homeless people in Scotland, and also to increase awareness of the challenge and problem of homelessness.

The porridge distribution will be taking place outside St John's, which is on the corner of Princes Street and Lothian Road in Scotland's capital.

THE 'FIRST SUPPER' IN EDINBURGH

The new Centre for Living Christianity, dubbed CLiC for short, is starting up in Edinburgh this weekend with an informal social event reflecting its “relaxed but thoughtful” approach to exploring religious faith in a sceptical age.

CLiC’s ‘First Supper’, from 7 to 8.30 pm on Sunday October 7, takes place at Henderson’s Café at St John’s Church, located at the corner of Princes Street and Lothian Road, in the heart of the Scottish capital.

There will be food and refreshments, plus an opportunity to hear about the vision and plans for the new initiative, which is all about “exploring faith at the crossroads.”  I'm pleased to be involved in the venture and on the co-ordinating group.

The full CLiC programme can be viewed and downloaded on the Centre’s new website.

The ‘First Supper’ at 7pm on Sunday 7 October is open to all. There will be a charge of £5 to help cover costs.

Those planning to attend are asked to drop a note to: donald.reid@stjohns-edinburgh.org.uk
Posted by Simon Barrow at 7:11 PM No comments:

A CHANGE OF PERSPECTIVE 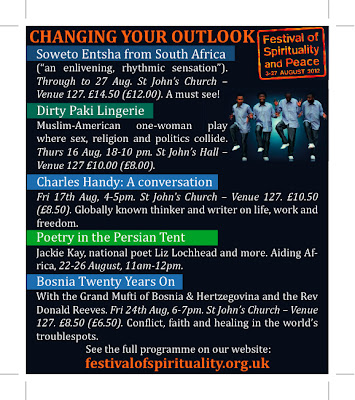 Posted by Simon Barrow at 8:05 AM No comments:

WHAT TO SEE IN EDINBURGH

I'm involved in the 2012 Festival of Spirituality and Peace, both as Media Coordinator, and as a speaker at two events. The first is on Disorganised Religion (Thursday 9th August, 5.45pm at St John's Church, Princes Street, Edinburgh), the second on A New Jubilee: Financial Chaos, Occupy and Faith at the same venue, 6-7pm. 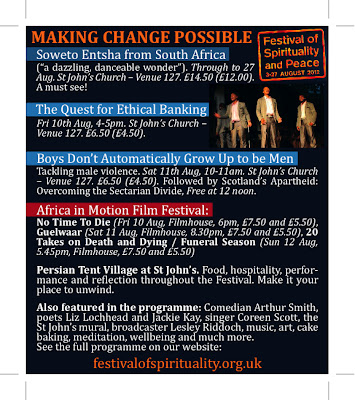 Posted by Simon Barrow at 9:04 AM No comments:

We live in an era where people are inquisitive about spirituality, but hugely distrustful or even hostile towards ‘organised religion’, especially in its Christian forms.

But there are strong anti-institutional and non-hierarchical traditions in Christianity and beyond.

Can Anabaptists, Quakers, Nonconformists and loyal dissenters from within the major streams of Christianity offer a new vision of faith and an alternative to top-down religion?

Join the ‘vast minority’ at the Festival of Spirituality and Peace in Edinburgh to discuss what a radical reformation in the Church has to offer - and how this relates to the wider demography of religious and belief-based change in a globalising world.

Speakers: Ian Milligan, from Exploring Anabaptism in Scotland and the Bert community in Glasgow; Simon Barrow, co-director of Ekklesia, trstee for the Mennonite Centre Trust and former global mission secretary for Churches Together in Britain and Ireland; and Michael Marten, co-founder of the ‘Critical Religion’ research group at the University of Stirling. In partnership with the Iona Community (http://www.iona.org.uk/) and Ekklesia.

* Book now via the Hub
Posted by Simon Barrow at 5:41 AM No comments: