People from a range of traditions in the US and elsewhere are fasting for peace in Iraq tomorrow, as part of a continuing commitment to work and pray for change - the theme being "from conquest to community, from violence to reverence". 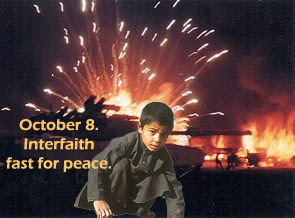 The idea of fasting is little comprehended these days, probably being seen merely as a piece of punitive self-abuse by those persuaded of Dawkins-like simplifications. In the Gospels, Jesus warns against the manipulation of fasting by religious authorities. Rightly understood, however, it a practice of self-examination and social re-orientation, based on the notion that human beings are not simply the sum total of their appetites - but have the God-given capacity to transcend self in solidarity with those who are denied the bread of life, and in reaching out towards the gift of a transformative love beyond limited or tribal affections.

Fasting is therefore an integrative discipline, based on the realisation that we think with our bodies and desires, not with disembodied and unaffected minds (the conceit of a certain naive conception of autonomous reason). Our rationality is inextricably bound up with our being relational creatures - 'dependent, rational animals', as the moral philosopher Alasdair Macintyre has put it. There is genuine liberation in this.

In a consumer society, fasting has a particular poignancy. As a distinctly 'religious' practice with broad roots it can connect with 'secular' initiatives like Buy Nothing Day (coming up on 24 November 2007) and other attempts to resist the "thou shalt have no other jeans before me" culture. That, by the way, is the wonderful title of an essay by the late German theologian Dorothee Soelle. It appears in a collection of essays edited by social theorist Jurgen Habermas called The Spiritual Situation of the Age (MIT Press).
Posted by Simon Barrow at 12:26 PM