Here's a good article by Alex Kirby, former chief religion correspondent for the BBC. I think it is right in both its identification of the problem and its final generosity of spirit and judgement. It's interspersed with two cartoon assessments, the first from a broadsheet paper, The Guardian, the second from the iconic (though not in a good or meaningful way) tabloid, The Sun. Both are copyright (c) of their originators. And they may say more about us than their subject. Just a thought... 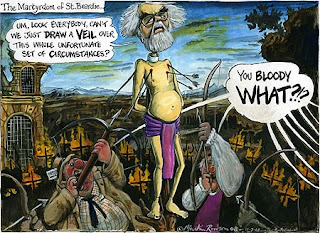 "If Rowan Williams ever imagined his explanation could get him off the hook, he is wrong. The damage is done, and it will take more than his elegant mea culpa to undo it.

"The archbishop was wrong to accept in his BBC radio interview that there could be anything inevitable about any part of Sharia ever holding sway in the UK.

"He was also pretty certainly wrong not to ask someone to rewrite his speech so he would not have to apologise, as he has, for its "unclarity" and his own "clumsiness".

"And he should have had some idea of how the very word Sharia is enough to drive reason from many minds. 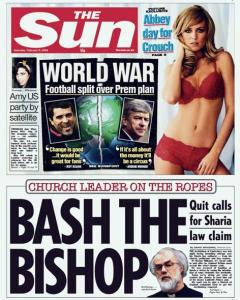 "All that said, though, the damage he has caused is minuscule by comparison both with what his critics are doing and with the good he himself has done."


"There is a tradition in Christianity of holy men and women known as fools for Christ, innocents who often used unconventional or even shocking behaviour to challenge accepted norms. It seems an apt description of Rowan Williams.

"His tongue sometimes stumbles, but his brain and his heart are among the church's best, and probably better than it deserves."
Posted by Simon Barrow at 10:17 PM