... a whole bundle of goodies have found their way into my (increasingly overflowing and disorganised) 'favourites' folder. I might as well share them here. First, though in no particular order of priority, is the Faith and Policy weblog - a good source on US developments from a progressive viewpoint. Then there's Ars Disputandi, the online journal of philosophy and religion.

Meanwhile, in the arena of biblical studies, Dr Mark Goodacre's New Testament Gateway project is without peer, and has a fine NT weblog attached to it, too. I have used it on a number of occasions, but lamentably I have not referenced it before. Also worth referring to is Hypotyposeis, Sketches in Biblical Studies by Stephen C. Carlson. Part of it includes a useful Synoptic Problem site. For those who are into that kind of thing. Oh yes, and The Bible in Transmission is a regular journal which explores the resonance of scripture in public life.

Inter alia I came across and interesting exchange between Jim Gustafsson and William C Placher on postliberalism, from Christian Century. I will return to this at some point. Also a fascinating Theology Today article by Sandra M Schneiders on church study and biblical scholarship in dialogue. 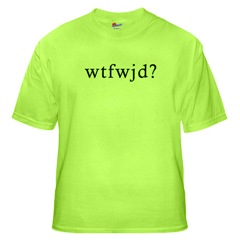 On a lighter note there is the (consciously misspelt) satirical magazine The Wittenburg Door, a nominee for the 2004 Utne independent press awards in the US. Rightly so. And you could no doubt dare to procure yourself a WTFWJD? t-shirt from Sara's Land of Cleverness, just to cross one of the great cultural divides of our age. Incidentally, Going Jesus is an amusing exploration of that darkly innocent land that is religious kitsch. The sort of thing you might want to bear at Landover Baptist, the peeless satire of the religious right assembled by a couple of wicked ejects from Falwell's mis-named Liberty University.

Back in the world of meaningful encounter, the First Mennonite Church of San Francisco looks a good place to be, if you happen to be physically located in the Bay area sometime. And Prodigal Kiwi's weblog is always very stimulating, on everything from the marginal emergence of missio Dei to 'the new monasticism'. Cybervisitors welcome, I'm sure. But New Zealand is also a very nice place in real time.

Many of these will go into my permalinks when I get a moment...