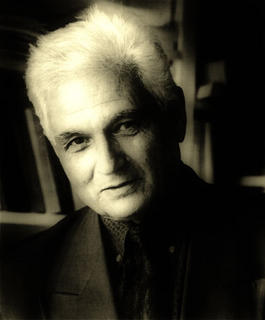 I was grateful to get this out-of-the-blue response from author Emmet Cole:

"[I] very much enjoyed your short article Derrida Among the Theologians. I agree with your assertion that the theological implications of postmodern thinking are yet to fully unfold -- one can only hope that the effect is largely positive, which I take to mean that suffering is reduced and joy enhanced. [Indeed! SB]

"I thought I'd direct you to an interview I had recently with John D Caputo. The interview is based around Caputo and [Jacques] Derrida's use of [James] Joyce's term 'jewgreek' (which I take to be a figure of postmodern Christology); the question of what is undeconstructible is also raised."

It is, to be sure, a great interview. And I'm also delighted to have discovered The Modern Word. Essential stuff. It's been added to my permanent links.

Among many other gems from Emmet's brief exchange with John Caputo, I single this out for enjoyable and profitable re-digestion:

I have a new book entitled The Weakness of God that will be out sometime in 2005. This will be my most theological statement, philosophical-theological, that is, and here I speak of something I call a “sacred anarchy” – I take special note and heartily approve of your use of “Joyous Anarchy.” There is tradition of “Christian Anarchy,” in Jacques Ellul, for example. By this expression I mean that the divine favor rests on the one who is out-of-power and authority (arche), the left out and left over; on weakness, not power; on the last, not the first; on the lost, not the safe. That I think is the philosophical lesson to be learned from meditating the life of Jesus, and what it means for God for take the form of flesh. If Jesus spoke Greek instead of Aramaic, if he had an urban and Greek instead of an Aramaic, rural and biblical imagination, if he uttered propositions instead of telling parables, if he used the Greek word “ethics,” then my prediction is that such an ethics would be an “anarchical” one, where the real meaning and force of the “teaching,” Torah, or the “law,” the alpha and the omega of the Torah, to speak a little Jewgreek, would be that the mark of God lies on the face of least among us, the an-archical. I wax a little heretical in this book by extending this anarchy to God’s own being, which I want to maintain is marked by weakness not strength, which is emblematized in the Crucifixion. There is something like this in [Jurgen] Moltmann, but there I think it is still consistent with the orthodox teaching of omnipotence, whereas I am not so sure that I am orthodox.

Many Thanks for your nice blog. I will come back.
I wanted just to mention an interesting site regarding: Religions, with more than 500 pages, Religion News and Articles Religion Universe: Buddhism, Christianity, Hinduism, Islam, Judaism, Taoism (Daoism) and many others