THE PREDICTABLE NEW WARS OF RELIGION?

The Economist has today published a special feature on 'religion in public life'. An initial survey suggests that it contains some very interesting and useful material, but is rather predictably over-reliant on the headline approaches of Philip Jenkins, John Neuhaus, Niall Fergusson, the aura of the sterile 'clash of civilizations' framework and the 'superstition versus modernity' non-debate. 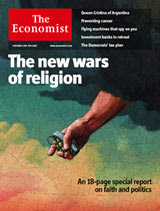 Missing, as far as I can see, are fresh perspectives looking at the changing role and importance of civil society, growing sources of pluralism within communities of religious (and other) commitment, the post-Christendom analysis, John Gray's treatise on terror and modernity, alternative discourses on theopolitics, and 'the clash of barbarisms' counter-position to Huntingdon lite and the neocons - all of which introduce helpful distinctions missing from what have become the standard sociological tropes. As The Economist special section leading article ('In God's Name') acknowledges, the mainstream theorists got it wrong ten years ago, and they could well be in the process of doing so again.

Moreover, if the 'wars of religion' analogy is going to be deployed, it would be helpful to revisit what the original ones were about in some greater depth (mostly not religion, actually, but the struggle for the rise of the modern state), via someone like William T. Cavanaugh. I'll say more about that in due course.

I have also offered some further initial thoughts about 'religion' in public life on Ekklesia. Meanwhile, here's a flavour from The Economist:

Philip Jenkins, one of America's best scholars of religion, claims that when historians look back at this century, they will probably see religion as “the prime animating and destructive force in human affairs, guiding attitudes to political liberty and obligation, concepts of nationhood and, of course, conflicts and wars.” If the first seven years are anything to go by, Mr Jenkins may well turn out to be right.

What has changed? The main protagonists are oddly unhelpful in providing explanations. Believers usually produce some version of “you can't repress the truth for ever.” Sociologists point out that outside western Europe most people have always been religious. Peter Berger, the dean of the subject, chides journalists for investigating the religious rule, not the secular exception: “Rather than studying American evangelicals and Islamic mullahs, you should look at Swedes and New England college professors.”

Yet even if underlying piety has not changed that much, religion's role in public life plainly has. Only ten years ago, most academics and politicians would have dismissed Mr Jenkins's claim about religion being central to politics as weird.

Read the whole feature here.
Posted by Simon Barrow at 10:15 AM

Interesting how science (rightly) insists that religionists should understand science, but (wrongly) fails to reciprocate by actually trying to understand religion, and generally assumes that anyone who subscribes to a religion must by definition be a frothing fundamentalist of one variety or another.