"We live limited lives until we 'cross over' into the concrete world of another country, another culture, another tradition of worship ... I have left forever a small world to live with the tensions and the tender mercies of God's larger family." - Joan Puls, from her book Every Bush Is Burning (WCC).
Posted by Simon Barrow at 6:13 PM No comments:

GAG SHOOTS ITSELF IN THE FOOT 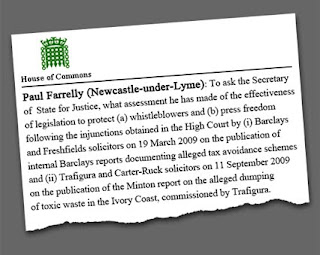 Wonderful news that the new media has helped to scupper one of the most outrageous attempts at a gag in British history - oil trader Trafigura's injunction through law firm Carter-Ruck against the Guardian newspaper, which for a time prevented them from reporting... a parliamentary question. That's right, a question asked by an elected member of a democratic assembly. The free speech implications of this were and are monumental. In fact, the company has succeeded only in drawing millions upon millions of people's attention to its nasty practices concerning pollution and the Ivory Coast - the opposite of its intention. Barclays and Tesco are among those who have used legal action against the Guardian in the past for gagging purposes. It is vital that such attempts to misuse corporate power fail. And ordinary people can help by defying them and using the technology at their disposal to do so. Now Gordon Brown is calling for reform of super-injunctions. Here, for the record, is the follow up to the original parliamentary question (no. 61) Transfigura wanted to keep quiet. Let the noise continue.
Posted by Simon Barrow at 11:31 PM No comments:

BACK IN THE WRITING POOL

As a friend remarked not so long ago, I've been rather "blog-lite" recently, other needs and priorities having interrupted the flow. However, I'm prompted back into action by a slight pang of guilt at being described as a "regular" blogger in a biographical note that appears in the programme for the conference I'm attending at the moment - 'Religion in the News' at Cumberland Lodge (pictured). Guilt is not a good spur for this particular medium, however. There's already too much pathology in cyberspace. "Be there for a positive reason or be somewhere else" would be my watchword. And as it happens I'm running a workshop/seminar this afternoon on the 'new media'. About which (and this gathering), more anon.
Posted by Simon Barrow at 10:31 AM 1 comment: