Today marks the 6oth anniversary of the nuclear attack on Hiroshima, which killed 130,000 people (mostly civilians) and scarred generations with radioactive poison. It is also the Feast of the Transfiguration, when, in contrast to the blinding light of nuclear death, the radiance of God's love is seen in the face of Jesus, his closest followers, and two iconic figures of the Jewish prophetic tradition - Moses and Elijah. 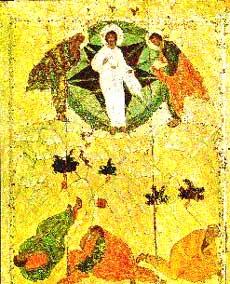 That many Christians will probably make no connection between these two events is eloquent and disturbing testimony to the way faith has been domesticated within the private realm. It is also, ironically, testimony to the way this colludes with betrayal in the public realm. For when the crew of the Enola Gay went of to wreak death on Hiroshima, they and their evil weapon were 'blessed' by a Christian chaplain. Judgement is required first of the household of God, as the New Testament reminds us.

Fittingly, some senior British Christians have today signed a statement from the Campaign for Nuclear Disarmament calling on the UK government to disavow nuclear weapons and to seek their abolition. At the moment Britain is set on a course towards a £10 billion Trident replacment.

But with the exception of the Methodists, most established church bodies have been silent about all this. Caught in the headlights of their own decay, their interest is focussed instead on unseemly internal squabbles and the mangement of decline. Today is a good day to pray for a recovery of vision and priorities.

John Davies' sermon from 2000 is also worth attention. As he suggests, in some terrible way the nuclear mishroom cloud (clouds also link the bomb and the epiphany) may be seen as an invitation to share in Christ's sufferings in the world, to echo Bonhoeffer.

Meanwhile, the always estimable Paul Oestreicher (Canon Emeritus of Coventry Cathedral and Quaker Chaplain at the University of Sussex) has written an excellent piece in The Guardian, 'The message of Hiroshima'.

Inter alia, and at a time when attention is (not unjustifiably) focussed on acts of killing carried out in the name of Islam, Oestreicher reminds us that Hitler's war had the support of the official church hierarchy in Nazi Germany. "God with us" was inscribed on every soldier's belt buckle.

[The picture is Rublev's famous icon of the Transfiguration, courtesy of Jonah House]

Hey i got here searching for affiliate marketing forum
Your sites not too bad!

You got good rankings for them keywords affiliate marketing forum