As Elias Chacour has often remarked, the tragic irony of Israel-Palestine consists in the enmity of two wronged and dispossessed peoples who can recognise their own wounds, but mostly not each other's. The resulting pain is seen again in this week's Israeli pull-out from Gaza and in the horror of Shfaram. For some the resettlement marks an agonising uprooting, for others the beginning of a rightful restoration. But there can be no "common ground" without a radical change of perspective. 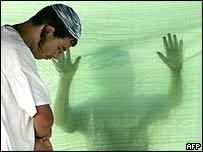 At the heart of this running sore lie claims to land, and not least religious claims. "No-one can deny that God gave the land to us, and to us alone", a Jewish settler cried in a TV news broadcast I saw yesterday. Muslims make counter-assertions in the name of Abraham, too. All this is tragically wrong. The scriptural vocation is not about singular possession but justice and shared inheritance. The theology of the earth and the land, as Walter Brueggemann says, is complex and multifaceted. But Leslie C. Allen (once, briefly, my teacher) and Glen H. Stassen summarised the contemporary upshot well in Sojourners magazine:

Most Zionists claim that God's eternal covenant with Abraham and his descendants (Genesis 12, 15) means that Israel must have undivided political sovereignty over all the land mentioned there, which stretches from the Nile in Egypt to the Euphrates in what is now Iraq.

Their claim is biblically erroneous. God's covenant and promise of the land in Genesis is given to Abraham and his descendants, not only to Israel. Abraham is "the father of many nations," not only one nation (Genesis 17:3-6); Abraham's descendants are Jews, Arabs, and Christians. The mother of Abraham's son, Ishmael, was Hagar the Egyptian. Hagar produced descendants with Abraham and received a covenant promise: "I will so increase your descendants that they will be too numerous to count" (Genesis 16:1-15). Those descendants were Arabs, settling in Arab territory (Genesis 25:13-18). Furthermore, Paul writes that Abraham's descendants include Gentile and Jewish Christians: "all who believe"—both Gentiles who "have not been circumcised" and "the circumcised" (Romans 4:11-12).

The prophets of Israel announce again and again that if Israel does not repent and do justice, it will be driven into exile. True and effective support for Israel is to join the call of the prophets for repentance, justice, and peacemaking. That is what will make life more secure for the people of Israel and Palestine. As the prophet Jeremiah wrote, "If you really change your ways and your actions and deal with each other justly, if you do not oppress the alien, the fatherless, or the widow and do not shed innocent blood in this place...then I will let you live in this place, in the land I gave your ancestors for ever and ever."

At the moment the trauma of the settlers is evident. But Gaza's 1.4 million Palestinians live in awful, cramped conditions in one of the most densely populated areas on earth - while Israel's 9,000 settlers have occupied 15-20% of the land by force since 1967. They have been offered compensation. Meanwhile the local Palestinian economy remains in ruins. Unemployment is over 70%. Families are surviving on aid. 85-90 % of Palestinians in Gaza are routinely subject to severe travel restrictions. The concern is that the pull-out will not end the suffering. And house demolitions continue elsewhere in the occupied territories.

But there is hope. Tikkun offers an alternative Jewish spiritual perspective. Jews are finding common cause with Palestinians and are cooperating for mutual justice. ICAHD is a fine example. Christian Peacemaker Teams are at work in Hebron. Acting and praying for change remains a demanding business...