[160.1] CIVIL PARTNERSHIPS ARE A BLESSING

At last a senior figure in the Church of England has had the courage to speak out affirmatively on the matter of civil partnerships, and to criticize the mean-spirited and fearful response of the House of Bishops on the UK legislation, which comes into effect in December 2005. The person prepared to stick his head over the parapet (not for the first time) is Peter Selby, the Anglican Bishop of Worcester, with whom I had the pleasure of working in Southwark Diocese in 1991-2. His full statement can be seen on the Worcester Diocese site. 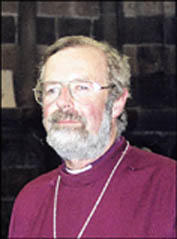 Back in 1999 I wrote a small booklet called Towards Communion: Recovering Human Sexuality as an Ecumenical Concern (Coleman Press) which offered a reframing of some of the core theological issues, and included reference to ways that Peter has also courageously sought to do that over the years. He is often characterized by the media as "a liberal", but for anyone familiar with his work, that is a vast oversimplification. His liberality arises from a deep intellectual and spiritual engagement with the Christian tradition and the demands of biblical interpretation -- in much the same way as Rowan Williams in The Body's Grace (slightly curiously reproduced by iConservatives!) and elsewhere. Its concern is not cultural accommodation, but the radical nature of the Gospel.

Incidentally, in addition to his Guardian column which I referenced earlier on FinS, Giles Fraser wrote a very good Church Times piece on civil partnerships, called "Why you need love and more". Thanks to David Wood for reminding me about it. The excellent Thinking Anglicans website has also been following the saga bit-by-bit, for those who want the whole scoop.