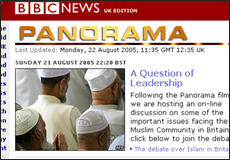 The row between the Muslim Council of Britain and the BBC over John Ware's Panorama documentary 'A Question of Leadership' (on which I commented at the time, and subsequently elaborated) rumbles on. The important new weblog Pickled Politics covers the ins and outs well, with Sunny Hundal developing the thread of his analysis in AiM ("Asians need better leaders and the media is not helping"). The BBC published a detailed response yesterday by Mike Robinson, editor of Panorama. He declares: "I have found there to be no truth in your claims that this programme was dishonestly presented, maliciously motivated or Islamophobic." The MCB is, not surprisingly, dissatisfied. It says it will now go to the BBC's Editorial Complaints Unit. Meanwhile a verdict is also due from regulator Ofcom.

But the deeper question is 'who speaks for whom?' and how do progressive and other nonconformist Muslim voices get properly heard as part of a mix which represents the true diversity? Pickled Politics comments: "[B]ecause Muslims ... are too used to biased reporting against themselves, it was easy for the MCB to paint this as another such attack. It may have gotten the government and other organisations to think twice about the MCB (important), but for Muslims themselves it further closed that window of dissent. And unfortunately over the long term that is what is needed." [On a different tack, see also Sunny Hundal's Independent article on British Asians and media stereotyping]