BOTH IN AND OUT OF TIME 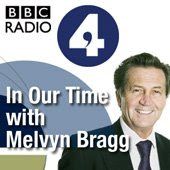 Though it can sometimes be infuriatingly truncated (Melvyn Bragg does a good job, but has an unassailable broadcaster's penchant for short-circuiting anything that might demand the elliptical in thought terms), In Our Time, on BBC Radio 4, is an absolute "must listen" for me. Last week it was the impact of the Greek myths, next week the ramification of the dissolution of the monasteries. Thinkers and events often simply bypassed, ignored, subsumed or dismissed today are traced back into life and thought by a panel of specialists, including new and innovative reflectors as well as more established voices. It is a fine, talking heads format. I wish it was twice as long, but the 45 minutes is rarely squandered.

This week (today in fact, some 15 minutes ago as I write this) it was a programme on one of my key influences, Soren Kierkegaard. What was particularly pleasing was that, although Bragg didn't invite a theologian to take part (Steve Shakespeare or George Pattison would have been great), Kierkegaard the Christian thinker, and indeed the progenitor of post-Christendom, was not marginalised - though the website intro doesn't mention it. Trying to understand the man without comprehending his disturbing faith and tortured discipleship is, of course, nonsensical. But I have heard a number of people attempt it. Satre, though in a different place, certainly knew better.

One of the many pleasing aspects of the programme was that it also questioned what is popularly meant by terms like 'subjective' and 'objective', as Kierkegaard himself did. And it spears the fatuous but common charge that he was somehow an irrationalist, just because he punctured the absolutist claims of a certain kind of 'rationality' (one hugely popular today), dismissed the primacy of the philosophic over the lived, and challenged the pretensions of a kind of systematising and unifying thought traceable back to Hegel. As he was quite right to do. A marvellous broadcast, and for me the best Easter present I could imagine.

Whatever you do or don't do today, download the podcast when it becomes available later today and give it a listen. Or you can just listen for again on streaming audio for a week (until next Wednesday evening). You will thank me, I hope! Truly inspiring stuff - a good introduction to Maundy Thursday, Good Friday, the waiting of Saturday and the promise of Easter Sunday - which for Kierkegaard (as for any mature reading of the Gospels and the New Testament) could never be some easy "happy ending".

Love, not 'fear and trembling' is the essence of Christianity, Kierkegaard believed. But that does not make it any more uncomfortable. (More on this to follow - there are some resources here.) Links: D. Anthony Storm's Commentary on Kierkegaard; BBC/OU Open2.net - Philosophy & Ethics; Howard and Edna Hong Kierkegaard Library; Wikipedia.

In Our Time examines the history of ideas, discussed by Melvyn Bragg and guests, including philosophy, science, literature, religion and the influence these ideas have on us today. Broadcast weekly 9am - 9.4am, Thursday. Repeated 9.30pm.

See also: Thinking outside the system.
Posted by Simon Barrow at 9:52 AM