THERE IS SUCH A THING AS SOCIETY 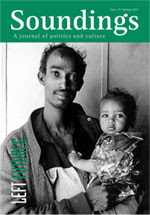 ... and, pace Margaret Thatcher, it is about more than adding individuals and families together while effectively treating them as autonomous units. (This is the import of her famous, or infamous, 'Sermon on the Mound', in which she didn't so much deny the social - in that sense her speech to the Church of Scotland's general assembly was misreported - as to reduce it to a function of the abstract person.)

By contrast, at the heart of the Gospel of Jesus, it seems to me, lies a dynamic for living towards a different kind of community founded on those pushed to the margins by the dominant political-religious order, a rediscovery of the unrestricted grace of God, the power of forgiveness and repentance, eschatological reservation, and a new set of basic social relations and practices (including economic sharing, foot washing, gathering & dispersal, and extravagant hospitality) which recognise the interdependence, solidarity and mutual creativity that builds us into something far greater (and also far more knowingly fallible) than the heroic individual can imagine.

In that sense, rather than through over-attachment to an ideology, I hope, I have always considered myself to be a socialist. I still do. But what does that mean any more, after the apparent triumph of the global market system (actually a set of systems of uneven quality, shaped by a military-postindustrial-consumer-communications complex), the rise of social movements including environmentalism (neglected by the ruling political ideas of modernity), and the death of various disastrous experiments in 'command socialism'? This is part of the debate going on in the journal Soundings, which curiously echoes the name of a publication arising from the theological foment of the 1960s in Britain. But that, as they say, is another story. One disruptively vital (I believe) question I would want to inject into secular discourses, as a Christian who doesn't think that people get to be good primarily by willpower, idealism or politics, is "whither redemption?" According to John Gray and others this is what we can no longer believe in safely. In Black Mass and elsewhere, he is often cuttingly right... but finally wrong. I shall return to that one in due course. The other key question the left is generally unaware of is post-Christendom. But I would say that.

Meanwhile, I was struck by this quotation, courtesy of Basem Adi, from Zygmunt Bauman, whose writings (often considered distinctly idiosyncratic, but still very fertile) I have been directed back to in the last year by the splendid Jordan Tchilingirian, who has assisted Ekklesia with research over the past year or so. Bauman said:

Quite. That last point was central to the thought and action (praxis) of the Hebrew prophets, in whose footsteps, among others, Jesus seems to have seen himself following.

Incidentally, A selection of Soundings articles is available free in the Reading Room.
Posted by Simon Barrow at 12:07 AM

I often think it's very unfair of yourself and others at Ekklesia to reduce whatever a poor, beleagured representative of the Church of England offers in public discourse to his or her attachment to 'Christendom' power structures. I suppose it would be equally unfair to reduce your own freely distributed opinions simply to a strong attachment to a culture of radical and open ended repudiation founded on some really rather non-Christian (or even spiritual) ideas about what man actually is, often called Socialism?

We're not meaning to be unfair Chris, but constructively critical. I have worked for, and spoken on behalf of, the Church of England myself, btw, and have a great affection for large bits of it. However, I do think it is important to point out that the C of E's perspective is often distorted by what I would see as its mistaken (and indeed disabling) assumption that its survival and its public role depends upon certain historic privileges, ones which in fact have little to do with the way the gospel narratives are shaped at heart. The issue is not whether an individual is consciously attached to Christendom power structures, but that this process is often quite unconscious. It appears as unseeable as water does to the fish, though it is in fact constructed and changeable, rather than natural and immutable.

As for mischaracterisations of where I'm coming from, or Ekklesia for that matter. Well, they come with the territory. But I don't think they can be substantiated by a fair reading of how we ground and develop our arguments, whether you agree with them or not. In this post, I pointed out that redemption is the key category that secular politics misses out on, for example. I welcome criticism, including yours - though given the fact that most of the assumptions of Establishment go unchallenged within Christians circles (what happened to the nonconformist conscience in England, I wonder?) it is puzzling that some people seem to get a bit upset when they are raised at all. I accept that the *way* they are raised is important, however. We do wrestle with that on a fairly regular basis. The media environment can be deaf to subtelty, but there are distinct dangers in trying to simplify. I am sure I/we have fallen prey to that on occasions. We also try to make changes and corrections when that is pointed out to us.