The mess occasioned by the recent encounter between Rowan Williams and the media over his speech about religious and civil law is well observed by Elizabeth Kaeton here. 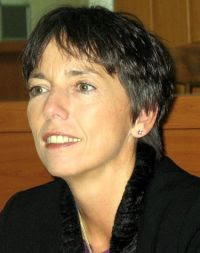 Meanwhile, Margot Kaessmann, who is a German Lutheran bishop with a wise and humane perspective, has recently engaged in a discussion with journalists in Berlin on how the church sees the media and vice versa. I am in broad agreement with what she says, although unfortunately I have been let down over 'off-the-record' comments made with great care about their status. That was with a church newspaper based in England, in 1987. They stitched me up something rotten. These days the environment in the UK (Germany is a bit different) can be even more feral, and while I think perspicacity is the best policy all round, cue cards are sometimes necessary to avoid it being abused too! As well as church 'spin doctors' who need a bit of de-spinning, there are some naughty journalists out there who are much more interested in the story they would like to write than the one that might actually be on offer, and whose ability to distinguish the two is somewhat lacking under pressure. No names, no pack drill.

Both the specific instance of the Sharia row and the general question of how one achieves an integrity between extended thought and straightforward communication are issues that interest me greatly, it won't surprise you to know. More thoughts on the former shortly. In the meantime, here is an offering from a few years ago about the meaning of Christian truth-telling in the 24/7 wonky-but-wonderful (and sometimes dreadful) alt-universe known as Mediaville. Of course I never dreamt that I would become so fully enmeshed in the commentariat when I delivered this speech, working as I was as a humble "ecucrat" [my neologism for 'ecumenical bureaucrat'] back then. Serves me right, huh? See: Speaking truth in an age of public relations, [Mennonite] Council on Church and Media, Washington DC, June 2002.

[The picture, (c) Stephen Brown/ENI, is offered simply because I happen to think, inter alia, that Margot is one of the most visually appealing episcopal figures I have encountered - a comment which is not intended to be gender specific, though I fear it might be. Perhaps someone should run a fully inclusive, non-sexist "cutest bishop" competition? I'm bold. But not that bold.]
Posted by Simon Barrow at 12:22 PM

All depends Simon on whether you mean cute in the American or British English sense. "Cute" to me means dinky and rather sweet and I can think of some Orthodox and also some South American indigenous bishops who would fit in with that - I'll probably get sacked for writing that!
Greetings from the language police
Jane

I'm married to an American, of course....

Oh, to skate on thin ice. How exhilarating! ;)