In London today protestors demanding an end to the military crackdown on anti-government demonstrators in the country officially called Myanmar - by the dictatorship - gathered outside the country's embassy to voice their concern (picture). Dozens of similar vigils and marches have been taking place around the world. 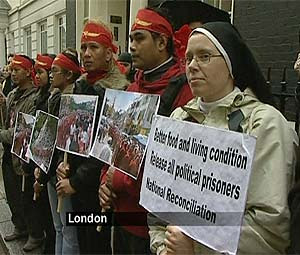 We had a small demonstration outside the Chinese Consulate in San Francisco yesterday. The local Burmese community took the lead, with back up from the Buddhist Peace Festival.