The rallies and concerts throughout the world today and tomorrow are unprecedented, both in their scale and in the breadth of their demands for action on unpayable debt, unfair trade and inadequate aid for the global poor. Over 350,000 people are marching in Britain alone as I write. 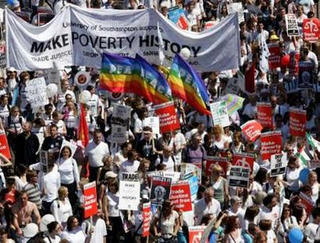 It is encouraging that Christian churches and other faith communities have played a major role in this initiative, alongside development organisations, trade unions and other civil society groups. Shifting the agenda of the G8 will be extraordinarily difficult, but no-one should minimise the import of people power on a worldwide scale.

Nor should the scale of opposition be underestimated. Ex-Tory MP Matthew Parris has a smug article in today's Times newspaper, ridiculing the Live 8 initiative and blaming Africa's plight on its own corrupt governance. This is a well-worn theme by those who wish to prevent change and thwart global justice. That many of the regimes Parris and his allies rightly condemn have been sanctioned by Western governments eludes his attention, along with the evidence that internal elites are strengthened by the inequities of the global system (and by the corruption in 'developed' societies that fuels it, too).

It is by strengthening the capacity of the poor to act economically, politically and culturally that change can come. But let's not forget that social transformation involves spiritual reformation, too -- love, hope, integrity, commitment and solidarity is what gives people the strength to act in the face of enormous odds.

This from Eberhard Arnold in 1928: "We need to reach the millions who live in cities, the hundreds of thousands in industrial centres, the tens of thousands in medium-sized towns, the thousands in small towns, and the hundreds in villages -- all these at once. Like a volcanic eruption, a spiritual revolution needs to spread through the country, to spur people to crucial decisions. People have to recognize the futility of splitting life up into politics, economics, the humanities, and religion. We must be awakened to a life in which all of these things are completely integrated."

Here (and in today's rallies) we have a vision of a rather different kind of globalisation.