The World Development Movement in Scotland has been running a live all-day account, with pictures and reports, of the G8 protests in Edinburgh today. Among those speaking was Noreena Hertz, from the Judge Institute at the University of Cambridge, who has shifted radically from a neoliberal worldview since her days as a privatization consultant in Moscow. 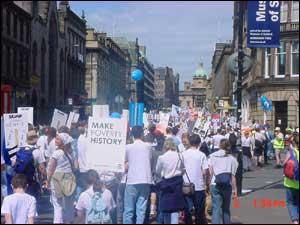 This picture is from Christian Aid's fine Pressureworks initiative, and was taken at 16.45 this afternoon.

The World Development Movement was established out of an alliance of church and world poverty action groups in 1970 to highlight the need for justice in economic relations between the rich North and the global South. Both Oxfam and Christian Aid helped set it up. WDM seeks to influence government policy on a range of international development issues, and to encourage grassroots action.