[142.1] AFTER ATROCITY: RECONCILIATION AS RESISTANCE

St Ethelburga's, a centre for peace and reconciliation in central London, is hosting an important inter-faith conversation this evening (from 6pm, UK time) about how to respond to last Thursday's London bombings. The full story is here on Ekklesia. The picture below is from a previous event. 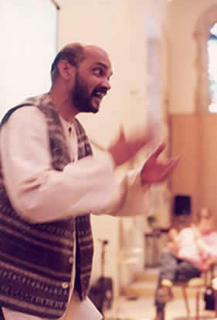 What they will engage in is far from cheap talk about reconcilition in the wake of atrocity: the church itself was the victim of bombing back in 1993, when 52 people were injured (one fatally) in a blast triggered by dissident Irish Republicans intent on de-railing the peace process there. What came out of that tragedy, due to the hard work and prayers of a whole range of people, was an initiative which is rightly considered a beacon of hope.

We need, I believe, to see active peacebuilding as an act of resistance in a culture of war and terror epitomised not just by those who use indiscriminate attacks, but by a wider politics of revenge and redemptive violence which reinforces such tactics. At the same time, it is important not to be sentimental about the motives and activities of jihadists and self-styled holy warriors from a variety of religious traditions.

Incidentally, responses to Beyond the politics of fear have been predominantly positive in the UK, but often angry from the US. That marks out a gulf in perception which certainly needs to be addressed. The CrossWalk news site has done this round-up of Christian responses to events in London from both sides of the Atlantic.