Another historic day for the Church of England - the General Synod, meeting at York, has voted to begin the process of removing the legal barriers to women in the episcopate. Excellent news, albeit of the kind that highlights the continuing absurdity of the C od E's establishment under the English crown. The picture below (courtesy of WATCH) is of eleven women bishops from the USA, Canada and New Zealand who attended the 1998 Lambeth conference. Now there are thirteen in ECUSA alone, including the Rt Rev Bavi Edna Rivera who became the US Episcopal Church's first Hispanic female bishop in May 2004, overseeing more than 102 congregations and 33,000 members in Western Washington. 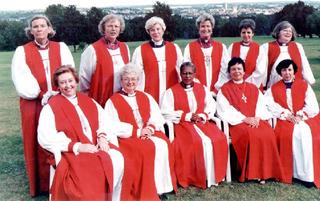 Early this evening I watched a curiously interesting Channel 4 documentary on the subject of women bishops made by Cristina Odone. A former editor of the Catholic Herald and former deputy editor of the New Statesman, Odone describes herself as both a feminist and traditionalist Catholic. Some months ago, when she started out making this show, she opposed women bishops and other changes within the Church-- on the basis that she saw faith as a bastion of consistency in a fitful world. Gradually her opinion was swayed away from the callous certainties of Ann Widdicombe and Fr Geoffrey Kirk, towards the idea that the Gospel might be about transformation: a view compellingly modelled by the Rev Rose Hudson-Wilkins.

There were two pivotal moments in Odone's reluctant conversion. One was the discovery, mediated by a patient biblical scholar at the University of Birmingham, that the Gospel traditions enshrine differences among the early Christians, not cast-iron conclusions about all matters of order and morality. She was especially shocked to discover a female apostle, Junia, hidden within the text of the New Testament. The other revelation was the passion and commitment of a group of Catholic women in northern England, studying the ordination they are currently denied.

Cristina Odone's fear of change in the Church (both Anglican and Catholic) was genuine, moving and salutary. But I confess to amazement that a well-educated person who has spent 45 years in the cradle of Christianity should have been wholly ignorant of the fruits of biblical scholarship, unaware of the variety within the tradition that upholds her, and content to believe that the essence of spirituality is fixity. Not surprisingly, neither the Holy Spirit nor the 14 provinces of the Anglican communion that already countenance women bishops got a look in!

But really, I should get out more...

Quality blog, enjoyed it. I will comeback.
I wanted just to mention an interesting site about Religions. With more than 500 pages, Religion News and Articles: Religion Universe: Buddhism, Christianity, Hinduism, Islam, Judaism, Taoism (Daoism) and many others

Hello, your blog is great, I also have abible blue website , hope that it is useful to you. Thanks

Find great deals on eBay with the misspelledauctions.com search engine