When the bomb blasts rocked London yesterday I was on holiday with my wife, Carla, in Exemouth. It was a strangely disconnected experience to learn of the unfolding tragedy, which looks to have claimed more than 50 lives and left over 700 injured. I had returned from London myself on Monday, having completed nine years work there for Churches Together in Britain and Ireland. I am now Co-Director of Ekklesia, and in that capacity I find myself back covering events as a journalist and theological commentator. 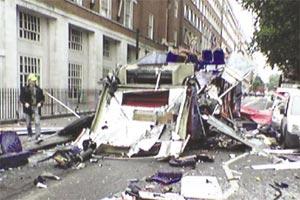 Of course the first response is to be concerned for loved ones and family. The picture on the left is the scene yesterday in Tavistock Square, a stone’s throw away from our friends associated with the Crown Court Church of Scotland. They were unharmed, but no-one is left unaffected.

It is also natural to want to ‘do something’ and to wish to feel some sense of positive connection in the face of horror. For a media monkey that means trailing the story, among other things. On Ekklesia we have been trying to highlight some of the less publicised aspects of the unfolding events – including, right now, the appalling attacks and insults faced by our Muslim sisters and brothers.

This is always a difficult issue to know how to cover. Quite understandably, the authorities want to play down the backlash, for fear that publicity will encourage thuggish zealots even more. The danger then is that Britain does not see itself accurately in the mirror. The country's self-understanding is still that of ‘a tolerant society’. There is some truth to that. But there is also a much darker side. Racism, xenophobia and anger towards Muslims, refugees, migrants and asylum seekers is neither new nor exceptional. It has to be acknowledged and faced.

Similarly, though the media focus on the London bombs is both reasonable and expectable, it is hard not to notice that the 200 deaths in Afghanistan last week were barely reported by comparison, and that the routine daily fatalities in Iraq (often outnumbering those in what is being described as ‘a major international incident’) have become mere numbing statistics for many reporters. No wonder disaffected Muslims feel that their lives are valued so much less than those of Westerners, not least by those who control the headlines.

Such realities are, of course, no excuse whatsoever for atrocities such as those in London. But though we may be right to see these bombings as a pathological assault on good faith of whatever kind, religious or otherwise, we would be foolish to perceive terrorist actions as being beyond any kind of rationality – even though it may be a form of reason we abhor in its intentions and actions. If we write off what we loathe as simply mad, we may feel comforted in our own sanity. But our own response will thereby be deficient in reason iteslf, and almost certainly humanity too. To love our enemies, as Jesus advocated, is to oppose them without becoming them.