[128.2] PAUL RICOEUR AND THE HERMENEUTICS OF HOPE

It is interesting to note that many obituaries for the late Paul Ricoeur, while rightly identifying him as a giant of twentieth century philosophy, barely recognise the significance of his theological concerns. That is true of the BBC’s report of his death, which is wholly silent on this point, and the otherwise substantial Stanford Encyclopaedia of Philosophy entry. The Daily Telegraph doesn’t do much better, but The Guardian (once the house newspaper of cultured despisers, now repaying the loyalty of its radical Christian readers a bit) strikes a good balance. 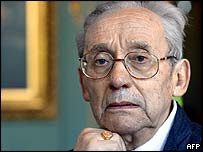 My only tangential connection with Ricoeur is that my wife was secretary of the English language department at the University of Chicago for part of the time that he was a visiting professor there (1979). Of course I have no way of knowing if he ever realised how fortunate he was!

The particular importance of Paul Ricoeur is that, in addition to sharpening our thinking about access to, interpretation of and transmission through texts, he brought phenomenology to the hermeneutical table, continental theory to traditional Anglo-American philosophising, and combined respect for specialisms with a commitment to the necessity of inter-disciplinary reflection.

Questia lists 16 Ricoeur-related articles. The entry in the Boston Collaborative Encyclopaedia of Western Theologians raises some substantial issues, in particular comparing Ricoeur with Hans Frei and the post-liberal Yale School, rightly noting: “Ricoeur does not want to think of everything in terms of intra-textuality, but rather in terms of some of the latest French reception theory. [He] encourages a much stronger dialogue of non-theological and theological readings, in contrast to Frei's more ecclesial based hermeneutic…. Both make a harsh distinction between the philosophical and exegetical modes. Ricoeur affirms the autonomy of philosophical thinking which can assist theology in making its claims more intelligible. For Frei, philosophy distracts the theologian from the primary task of elucidating the identity of Jesus as presented in the gospel narratives. Frei creates a false antithesis between the two disciplines.”

“[For Ricoeur] philosophy reminds theology of its epistemic limitations so it can not be dogmatic. Philosophy can function as 'a friend of the court' in terms of explicating the doctrines of Christian faith with precision and intelligibility. Since theology is hermeneutical, philosophy can be an indirect aid in thinking about hermeneutics. The general hermeneutic of Ricoeur allows for a plurality and specificity of regional hermeneutics (e.g. biblical hermeneutics), yet also allows for a continuing cross-traditional, cross-disciplinary conversational quest for truth.”

These are important correctives indeed. I do wish the narrative theologians, who have much to offer, wouldn't be tempted so comprehensively to overplay their hand in response to the weakenesses of scepticism.