[152.2] IN PRAISE OF UNDERGROUND THEOLOGISING

Via Maggi Dawn's excellent weblog, I came across a reference (on the equally valuable Prodigal Kiwis) to Stephanie Coontz's Marriage, a History: From Obedience to Intimacy. Looks well worth reading alongside Rosemary Radford Reuther's Christianity and the Making of the Modern Family, Stephen Barton's The Family in Theological Perspective, and the sadly-neglected Church of England report Something to Celebrate (Rosemary Dawson, Sue Walrond-Skinner et al) - well, if you are interested in puncturing beneath the deceptive rhetoric of "traditional values" that surrounds current intra-church argument about partnerships, civil and otherwise, anyway. 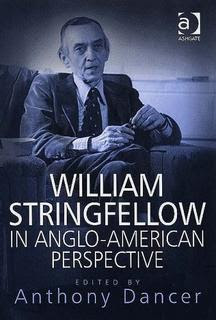 However, apart from wondering how these glorious people have time to track this stuff (for me, it's usually a question of delaying tactics on some other project!), the other thing I noticed with pleasure was that the Kiwis are currently reading Anthony Dancer's collection, William Stringfellow in Anglo-American Perspective. Now I have a vested interest here: I contributed a chapter to this book called 'Speaking Nonsense to Power: The Mission of William Stringfellow'. There's a brief excerpt here. But to be honest I didn't think anyone much would catch up with the book because, fine publishers though they are, Ashgate have issued it in a hardback-only edition at £47.50. Ouch.

About the only way I can think of boosting sales (which won't benefit me financially anyway, I should point out) is by mentioning that Rowan Williams, Ken Leech and Chris Rowland are also among the contributors. But there are actually other and even better reasons for taking a look at it. Namely, the subject himself. For those who don't know him, William Stringfellow was a lay US Episcopal theologian and professional lawyer. He forged much of his thinking in the poor black parish of East Harlem, influenced both Karl Barth and Jacques Ellul, helped pioneer contemporary application of Pauline language about the "principalities and powers" (now better associated with the likes of Walter Wink and John Howard Yoder), contributed to Sojourners, and with his partner Anthony Townes developed an almost liturgical love of circuses.

Stringfellow died in 1985, and has mostly been overlooked since then, with his books largely out-of-print. Which is a pity, because he has more to say about the collision of radical biblical faith and modern empire than almost anyone I can think of. His theology is an affirmation of the underside of America, a resurrection wake-up call to the church, and a challenge to rulers (secular and religious) who abuse Christian faith to legitimise oppression. What could be more timely?

Tony's book, substantially revised over the past seven years, originates with a conference about Stringfellow at Oxford in 1997, which I was able to help co-sponsor through the Churches' Commission on Mission. It was a memorable occasion. As the collection's synopsis says: Stringfellow did theology 'underground', in the shadows, amongst the marginalised, with the disaffected. Consequently, whilst highly regarded by many acclaimed theologians of his day, he has remained on the margins of the theological academy. As one of freedom's greatest allies, and death's fiercest adversaries, Stringfellow espoused a theology of Christian practice... Part I gathers writings of Stringfellow to offer a unique opportunity to encounter his work first hand, bridging the chasm between academic reflection and grass-roots theological practice with which Stringfellow was concerned. Part II presents contributions from leading theologians, pastoral practitioners, educators and lawyers and offers a unique exploration of contemporary anglo-american theology.

I'm pleased to say that Eerdman's also re-issued Stringfellow's An Ethic for Christians and Other Aliens in a Strange Land at the end of 2004. Let's hope more of his work comes into print -and that Ashgate can be persuaded to put out a paperback version of Tony Dancer's collection, once all the theological libraries have shelled out their dollars and pounds.