[156.1] WHY THE POPE'S CHRISTENDOM ALTERNATIVE WILL NOT DO

In his first full-length broadcast interview over the weekend, Pope Benedict XVI called for a renewal of Europe's Christian roots - in a way that contained some echoes of the "Christendom awake" tendency in the Catholic Church, and beyond. 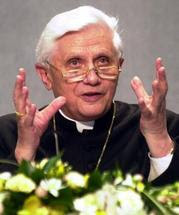 In an exchange which might be regarded as rather deferential in the more robust interview culture of the British media, the pontiff said some interesting and worthy things. But equating the Gospel message with "Christian society" and "Christian culture", which is his natural philosophical and practical tendency, is something I find profoundly worrying. (That's why I'm an Anabaptist kind of catholic Anglican, I guess!)

Referring to global challenges facing the West, the pontiff declared: "I believe civilization,with all its dangers and hopes, can only be tamed and led back to greatness if it recognises again the sources of its power" [emphasis added]. The Pope has a long-standing interest in Europe.

Although he has talked about the incompatibility of Christian faith with power and wealth, Benedict's latest comments will be seen by many as a reassertion of the Church's traditional commitment to Christendom, with its belief in the pre-eminence of Christianity in public institutions. His predecessor, John Paul II, similarly argued for a strong affirmation of God and faith in the now sidelined European Constitution.

But like many other Christians, Catholic and Protestant, I believe that an 'establishment' role for faith in England, as in Europe as a whole, weakens the subversive energy of the Gospel by privileging the church and compromising the plurality of public life - which is important not just to democracy, but to the integrity of Christian witness.

More encouragingly, the Pope also said to Eberhard von Gemmingen that it was a mistake to think of Christianity as "composed of laws and bans" and as "something toilsome and burdensome". Instead, it should be "like having wings", he declared. But Benedict's critics point out that the negative image is one he has himself strengthened through his resolute opposition to birth control, liberation theology, and open debate about gender and sexuality issues.

World Catholic News noted yesterday that an interview with a pope is a rare event. Pope John Paul II, during the 26 years of his pontificate, only gave a few media interviews. The most famous was the extended 1994 exchange with Italian journalist Vittorio Messori, which became the book 'Crossing the Threshold of Hope'.