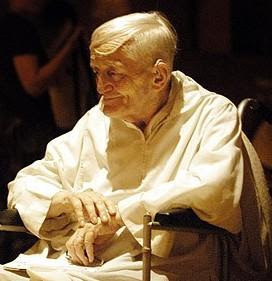 It was only in the early hours of this morning, in the middle of a sleepless night, that I heard the appalling news on the radio of the murder of Brother Roger Schutz at the Taize community on Tuesday. I have never visited the community myself, but like millions of people across the world, I am familiar with its music, its liturgy, its place in ecumenical Christian hope, and its example of peacemaking in an era of continuing violence and revenge.

At a stage in history when religion is again in the news for most of the wrong reasons, many of those associated with Taize model the possibility of a Christian conviction which is at one-and-the-same-time rooted in the tradition, contemporary, thoroughly outward looking, and focussed on the alternative way of Christ for a troubled world.

As far as I can recall, my first contact with the work of the communitywas through a Good Friday liturgy about twenty years ago, as we sung the invocation of the crucified rebel, "Jesus, remember me, when you come into your kingdom." No doubt that will be the prayer of many for Brother Roger right now.