[162.2] SEARCHING FOR ALTERNATIVES IN IRAQ

The tragedy of post-invasion Iraq is highlighted once again by a truly harrowing covert report from Haditha which "exposes the limitations of the Iraqi state and US power on the day when the political process is supposed to make a great leap -- a draft constitution finalised and approved by midnight tonight." 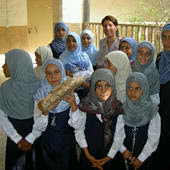 It ill-behoves those of us who always thought the war was a wrong-headed way of wrestling democracy from dictatorship to engage in any kind of "told you so" over such terrible events. Likewise, the importance of the current constitutional bartering, supremely difficult though it is, should not be dismissed. We must continue to hope and pray that politics can triumph over terror. But it is nevertheless grossly irresponsible for the Western coalition to go on pretending that it is "business as usual" in "the new, democratic Iraq".

Barring a miraculous result this evening, a radical re-think is needed about international involvement in the change process. And it has to go much further than simply following occupation with abandonment. The advocacy delegation report (*.PDF file) on Iraq from Mennonite Central Commitee is frank and concise. However, what is being discussed in alternative forums at present is, it has to be said, still piecemeal.

Meanwhile, Paul Rogers' weekly OpenDemocracy columns on 'the war on terror' remain among the best summaries of what is at stake globally. He is now an international security correspondent, having formerly been Chair of Peace Studies at the University of Bradford -- where Philip Lewis (a vital commentator on Islam in Britain) is also based. In addition, see the Oxford Research Group and the Global Policy Forum's Iraq crisis page.