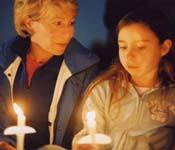 While media attention undestandably focusses on the fallout from televangelist Pat Robertson's recent hateful comments, it is worth reminding ourselves that responsible US Christian leaders (including people from key seminaries and academic institutions) earlier signed a powerful statement, Confessing Christ in A World of Violence, which gives a very different response to the use of force. Its signatories, up until February 2005, included ecumenicals, evangelicals and Catholics.

They write: Faithfully confessing Christ is the church's task, and never more so than when its confession is co-opted by militarism and nationalism.
* A "theology of war," emanating from the highest circles of American government, is seeping into our churches as well.
* The language of "righteous empire" is employed with growing frequency.
* The roles of God, church, and nation are confused by talk of an American "mission" and "divine appointment" to "rid the world of evil."
The security issues before our nation allow no easy solutions. No one has a monopoly on the truth. But a policy that rejects the wisdom of international consultation should not be baptized by religiosity. The danger today is political idolatry exacerbated by the politics of fear.