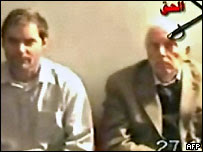 Most of the important work, obviously, is going on behind the scenes -- to try to establish a link with those sanctioning or influencing the kidnappers; to convince faction leaders that these men are not "spies", they are genuinely what and who they say they are; and to appeal for mercy.

It's easy to be cynical from a distance. "How do you expect monsters who would do this to respond to such pleas?" is a common response. But words and gestures are the only possible lifeline in a situation like this. That and the search for a common language of honour and dignity, however difficult and improbable that may seem. Captives have been freed as well as lost, let's never forget that.

So Electronic Iraq has launched a release petition in Arabic and English, together with a statement on CPT from Palestinian parties and groups.

Meanwhile, Bishop Munib Younan, a Palestinian from the Lutheran Church of the Holy Land, has called on those holding the four Christian Peacemaker Team workers in Iraq to release them. To those with the will to act, he declared: "I urge you from Jerusalem, the city of peace, to do your utmost to bring about the release of these apostles of peace who are the friends of every oppressed people." A similar call has been made by the World Council of Churches.

People of different faith groups and none have been joining vigils and prayer events in London and other parts of the world today to remember Tom Fox (USA), Norman Kember (UK), James Loney and Harmeet Singh Sooden (Canada).

This just in from The Nation: "Echoing the call[s from around the world] is an urgent appeal that's being introduced today by an ad-hoc group of concerned writers and activists in the US and Canada. Please read it and circulate it widely. Click here to join Arundhati Roy, Rashid Khalidi, Cindy Sheehan, Noam Chomsky, Howard Zinn and Nation writers Naomi Klein and Jeremy Scahill in signing the statement which calls for the activists' immediate release so that they may continue their vital work as witnesses and peacemakers. And, remember, time is of the essence." [This appears to be a mirror from the Electronic Iraq petition]

A full briefing on CPT and those who have been kidnapped is available here. And the BBC resume is also worth looking at.