[Update 11.28 GMT] Williams was executed this morning. His family and supporters say they will continue to work to clear his name. They say the decision was political, not evidence-based. 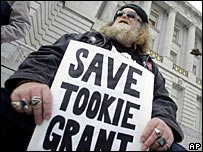 There are many lamentable things about the notion of a country deeming itself "Christian", or in the case of the United States (which I love, and from where my beloved wife and her family hail) being co-opted by self-appointed "moral majorities". The main problem is that their colonisation of faith usually renders it nonsense, and self-deceptive nonsense at that. This is well illustrated by the sad case of governor 'Terminator' Arnold Schwarzenegger and reformed Crips gang leader 'Tookie' Williams, who is about to die by lethal injection in the next few hours. The full report is here, but the following comments, juxtaposed, say it all for me.

The Los Angeles district attorney's office has said of Williams: “There can be no redemption... and there should be no mercy.”

Alex Kirby, a religious analyst for the BBC, says: “Oddly, for a country as obsessed with religious observance as the US, the Christian argument seems almost an afterthought. If it were central, the district attorney's statement would have to be withdrawn, because in traditional Christian theology everybody is eligible for redemption.”

(Kirby gets the rest of his theology of redemption, forgiveness and conversion slightly tangled after this, but I won't get into that right now. See, among others, Walter Wink, Jesus and Non-violence: A Third Way; When the Powers Fall: Reconciliation in the Healing of Nations.)