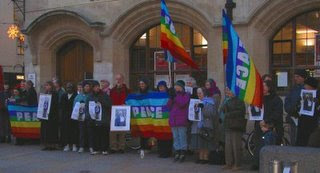 Amidst the agony of waiting and hoping, one of the interesting issues that has arisen from the CPT hostage situation in Iraq is the contrast between how different sections of media (and the communities behind them) have responded to the story. Even though Christian Peacemaker Teams were on to prisoner abuse and Abu Ghraib before anyone else, the mainstream continues to ignore such groups, except when a crisis erupts.

Here in the UK, Christianity is most often only good for a story when it is being silly, when it is declining, when it is fretting about sex, or when its hierarchs are being obnoxious or clueless. The routinely extraordinary things done by groups like CPT are simply "not news" -- even when they clearly are. They just don't fit "the script".

The church media isn't much better. Indeed it is often confused and baffled by people who think that Christian faith is about life transformation rather than churchianity or my-personal-Saviour. A deep commitment to the way of Christ that involves a refusal of violence, the embracing (rather than the haughty rejection) of 'the other', and so on, is for an eccentric minority.

As far as the abductions in Iraq are concerned, the main response of some Christian media outlets has been, in fact, to focus on accusations -- not well researched -- of "irresponsibility" against CPT. There is much church talk of 'mission' and (less often) 'discipleship', but those words are often little more than a cipher for maintaining control and doing nice, respectable things for Jesus.

The biblical tradition has a huge amount to say about peacemaking and social justice, but the Christendom church mindset sees these, at best, as add-ons. Whereas its own insecurities about identity (confusions over sexuality), authority (how to make the Bible our personal or communal weapon) and security (how we can come up with an 'emergent' or 'historic' brand to keep us in business) are what it's actually about, when the chips are down.

As we pray that the captives might emerge, we might ask ... Emergent church? Yes, but what and who really is "the Body of Christ", where has it come from, where is it going, what is it for, and what is it doing? Those remain the central questions. And the answers to them are to be found in places of endeavour, argument and suffering -- not "in church". More like, "in Baghdad".

By humbling contrast, the unexpected outpouring of Muslim respect, concern and recognition for the vocations of Tom, Harmeet, Norman and Jim in Baghdad, and the tragic plight they share with haundreds of abductees in a vortex of oppression and violence, has been noticeable. Of course, Islam has its own major issues with religiously sanctioned revenge. But what the Iraq hostage saga has shown is that there is another way of seeing and acting that people of good faith (whether they are 'believers', humanists, secularists or whatever) recognise as authentic -- if a little crazy -- when they see it.

The excerpt below is from Mark DeVine, writing on Ekklesia and in the marvellous Mother Jones. Among other things, he suggests that the secular left has something to learn from CPT, just as CPT (with all its faults) has been willing to work with, and learn from, others.

My last images of the Christian Peacemaker Teams in Baghdad was of their holding a vigil in Tahrir Square to protest against the detention and mistreatment of Iraqis by the US military in Abu Ghraib. This was in late March 2004, months before anyone in the United States had even heard of Abu Ghraib, or bothered to consider how our armed forces were treating detainees in the war on terror. But CPT knew full well what was going on in Abu Ghraib--that's why they were in Iraq, to "witness" the realities of the occupation--and they were determined to make sure that the Iraqis saw that there were Americans, and westerners more broadly, who were willing to put their bodies on the line to protest against such abuses. It's too bad that it's taken this tragedy to get the rest of us to listen. [Full article here]

Mark LeVine is Associate Professor of modern Middle Eastern history, culture and Islamic studies and author of Why They Don't Hate Us: Lifting the Veil on the Axis of Evil (Oneworld Publications, 2005). Visit Mark LeVine's website here. His article also appears in the latest Mother Jones.