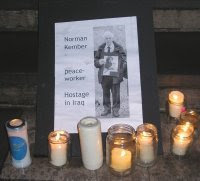 Yesterday I was writing, in connection with Advent hope and the CPT hostages in Iraq: "[Though it does not happen as much as we might want, hearts can be melted. Simply dehumanizing those whose actions revile us does nothing to break the cycle of hatred, even if it makes us feel better." Later in the day the news became public that Abu Qatada, allegedly Osama Bin Laden's agent in Europe, had asked his solicitor to arrange for a TV recording in his UK prison cell (where he is being held under British terror laws) to ask the Sword of Truth Brigades to have mercy on the four abductees. Extraordinary, whatever we think of his other views and actions. Note the deadline of their threatened killing (if US and UK Iraqi detainees are not released) has been extended for 48 hours to Saturday. There is a glimpse of light in a very dark situation, though no-one should doubt the continuing gravity of it. Petition for the release of the four. Incidentally, a friend in the US said recently that the issue is much more difficult to discuss in many Christian churches, where the work done by CPT is often seen as "too controversial" or "unpatriotic". How very sad. In Britain too, some of the church media have been rather recalcitrant, to put it politely.

For reference, here (below) is the full archive of material on the kidnappings from Ekklesia. Some of these links, but by no means all, have been notified on FinS.