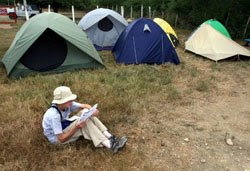 Sister Anne Montgomery, an associate of the Christian Peacemaker Teams, reads outside the "Witness Against Torture" camp at the military zone boundary near the US detention facility in Guantanamo Bay, Cuba, on 13 December 2005. The 79-year-old Sacred Heart sister has been among some 25 American activists who are praying and fasting to protest against the treatment of alleged terror suspects held at Guantanamo. Since 12 December they have been camped at a Cuban military checkpoint five miles from the US base. (Catholic News Service photo from Reuters) Full story here. See backstory on: Christian peacemakers demand entry to Guantanamo Bay 14/12/05