Thousands of Palestinians and Iraqis across the region have been joining vigils and protests to call for the release of the four Christian Peacemaker Team activists abducted in Iraq last week. In the West bank village of Litwanyah on Fridat, Palestinian women (below) mingled pictures of Tom Fox, Harmeet Sooden, James Loney and Norman Kember with those of their own children and loved ones.

A group representing Muslim citizens in the United States called yesterday for the release of the four. ''Those who left the comfort of their homes to advocate for the rights of others that do not share their faith, ethnicity or language should be celebrated and honored by Muslims, not humiliated by being made captives or, God forbid, killed,'' said Parvez Ahmed, chairman of the Council on American-Islamic Relations. ''This is a universal human ideal and a cherished principle of Islam.'' 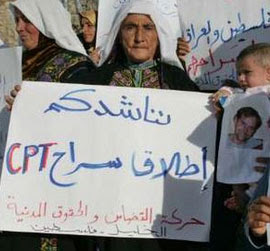 In Iraq, the Council of Organizations of Civil Society has made an appeal to "all people who care for freedom" to support the adductees, commenting: "We have found in the CPT workers a sense of religious co-existence, (that is why the Association of Iraqi Muslim Scholars have called for the release of the four members). We also found that the CPT were doing their utmost to release Iraqi detainees. They have similar actions in other parts of the world on top of which their solidarity with the Palestinian people in the Occupied Land (as His Eminence the Mufti of Holy Jerusalem stated in his last appeal for their release).

Among the more personal responses are those by Abdurrahman R. Squires, a former US marine who converted to Islam. He has launched an Appeal for the Christian hostages in Iraq, and writes on Tom Fox's own weblog, Waiting in the Light: "I just posted an appeal for your safe release, which included a moving letter from your [Quaker] friend Lorcan Otway. Myself and many other Muslims are praying that you and your fellow CPTers are released unharmed. Contrary to popular belief, turn-the-other cheek ethics and non-violent resistence are part of our Islamic tradition as well. God bless you and the work that you do."

Friends of Fox have unveiled their own website: http://freethecaptivesnow.org/