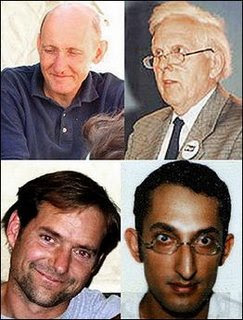 In a remarkable development as the deadline set down by the captors of four Christian peacemakers in Iraq looms, three Muslim detainees who have themselves been held for years without charge have urged that the hostages be shown mercy and set free.

In a film shown by Al-Jazeera television on Friday, a group calling itself 'Sword of Truth' said they would kill their Christian hostages unless all US and UK prisoners were released by this Thursday (8th December).

However three Muslims who have been detained without charge for between four and five years in Canada have urged that they be set free.

In a statement, Mahmoud Jaballah, Mohammad Mahjoub and Hassan Almrei, who have spent as much as four years in solitary confinement, say that one of the hostages, James Loney, has worked for the freedom of Muslims who have been detained without trial in this way.

They also point out that James helped the families of the Abu Ghraib prisoners and opposed the US invasion and occupation of Iraq.

"Some of us have spent as many as four years in solitary confinement. We are being held captive under security certificates because the government of Canada alleges we are linked to terrorist organizations and that we pose a threat to the national security of Canada." they said. Full story here.

This is another appeal from 'Mere Islam'. Further Arabic sources here.

Also read the last article and webdiary entries of detainee Tom Fox before he was abucted.

From the BBC last night: Extended Iraq hostage video aired. However, Christian Peacemaker Teams says: "[We are] concerned that the showing and the re-showing of the al-Jazeera tape dehumanizes both our team-mates and those holding them. In our media release, we have asked the media not to run it. We have refused to do TV interviews where they have wanted to use the tape."