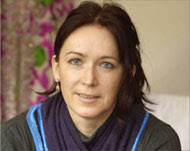 Forgive the emphasis on this story at the moment. It's one in which I'm personally involved. Here are some excerpts from the latest Ekklesia update (in full here). See the end for vigil info and links. Important also not to overlook the German aid worker, Susanne Ostoff (pictured left) who has also been captured - and is, for both better and worse, not getting nearly so much publicity.

Although anxiety and uncertainty about the prospects of four peace campaigners taken hostage in Iraq last week remains high, hopes for their release were given a big boost last night (3 December 2005) when five prominent Sunni Muslim groups condemned the kidnapping. The development followed the arrival in Baghdad yesterday of Anas Altikriti, a senior sponsor of the British anti-war movement and a member of the Muslim Association of Britain (MAB). His focus is on UK Christian Peacemaker Teams volunteer Norman Kember.

On Friday the kidnappers released a video, shown on Arabic news station Al-Jazeera, in which they threatened to kill the retired professor and his fellow hostages by Thursday unless all prisoners in US and Iraqi detention centres were released.Mr Altikriti is also due to be interviewed on al-Jazeera, which has been criticized for broadcasting the two kidnap videos of the captives.But the independent news service, which President Bush allegedly told British PM Tony Blair he wanted to destroy, has also published Islamic support for the CPT hostages, and has publicised a worldwide petition for their release.

The National Council of Churches USA has joined the World Council of Churches and other ecumenical and denominational groups in calling for the peace workers to be freed. They have also criticised the occupation and called for moves to withdraw US and allied troops.Mostly, Christian groups have decided to take a back-seat in the quest for release, recognising that Muslim voices (including, in Britain, the Muslim Council of Britain as well as MAB) are those that most need to be heard.

CPT is, however, encouraging groups to organize public candlelight prayer vigils throughout the coming week highlighting the messages “Love your Enemies”, “End the Occupation” and “Release the Peacemakers.”

Christian Peacemaker Teams, a global pro-active violence reduction initiative, is supported by the Mennonite Church USA and the Mennonite Church Canada. It has a UK network which is a partner of Ekklesia, the religious think tank. CPT works ecumenically with Protestants and Catholics, but also resources volunteers of other faith and no faith. It has specifically helped equip Muslim peacemakers. Sami Rasuli, is a member of the Muslim Peacemaker Team which was founded in Iraq in conjunction with the Christian Peacemaker Teams. He was recently interviewed here from Najaf.

The non-missionary CPT has been operating in Iraq since 2002, and has had a presence in Gaza and the West Bank for the past decade. It has previously worked in Afghanistan, Chechnya and Bosnia.

A full briefing on CPT can be found here